Like many places in our environment the power grid is quite badly polluted. When we switch on our washing machine or our computer we will never notice, but if we switch on an audio device like and amplifier we can definitely hear the difference between “clean”and “polluted” power. This phenomenon is a known issue in amplifiers. That is why Jaap Pees and Richard Herman designed their first CPS in the first place.

Big was their surprise when one evening they switched on Jaap’s Thorens TD-124 powered via the CPS. “Silence”, “blackness”, inner detail, everything improved! This was the beginning of the development of the CPS-2, a power regenerator for turntables. A regenerator, not a power line filter! The CPS-2 uses the Joules (used to be Watts) from the mains. It regenerates the 230 Volt (or 115, or 240) stabilizes it within 0.1% and by means of a very precise analogue oscillator a pure 50 Hz (60 Hz) sine wave is (re-) generated.

On the picture below you can see the “pollution” of the grid. Instead of gently rounded slopes, peaks and dips we see blurry lines and flattened peaks and dips.The lower line is a visual representation of the measured distortion which can add up to 4% ! What you see is the power from the average wall socket in your home. The pollution you see is caused by for instance switched power supplies (computers, flat screen televisions gaming consoles) energy efficient lamps (PL, LED) and halogen dimmers. 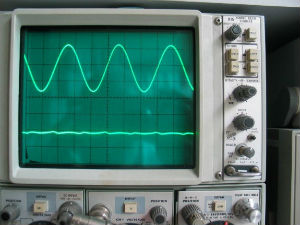 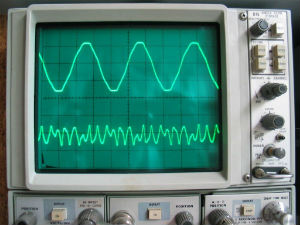 Our experience so far with the CPS-2 is that it gives an clearly audible improvement on most turntables. On the Thorens TD-124 and the Garrard 301/401 the improvement is major. The CPS-2’s output voltage is specifically chosen for the specific turntable it is supposed feed.

For the Thorens turntables form the 50’s & 60’s this 220 Volt. That is the voltage the motors were designed for. 230 Volt or 240 Volt is too high. This causes the turntabels to turn too fast. In order to obtain the correct speed the motor needs to be slowed down by the break. This causes extra forces in the motor resulting in unwanted vibrations which will be evantually picked up by the stylus thus distirting the audio signal. The (extra) use of the break to slow down the motor also causes unwanted friction which has lead to the premature death of quite a few motors.

Beause the Garrard’s idler wheels are in direct contact with the motor pulley the transfer of motor vibrations is often more serious. The CPS-2 works wonders…….